Is it against the rules to repeat an outfit on a blog? The last time I wore these printed pants was back in February, so if you are new here you probably don’t remember. Heck, there are so many outfits on here that even if you’ve been with me since the beginning, you probably still don’t remember.

Have no fear. I like this outfit because it is comfy so you get to see it again! Now with blonder hair and a new backdrop. And a new outlook on working out. 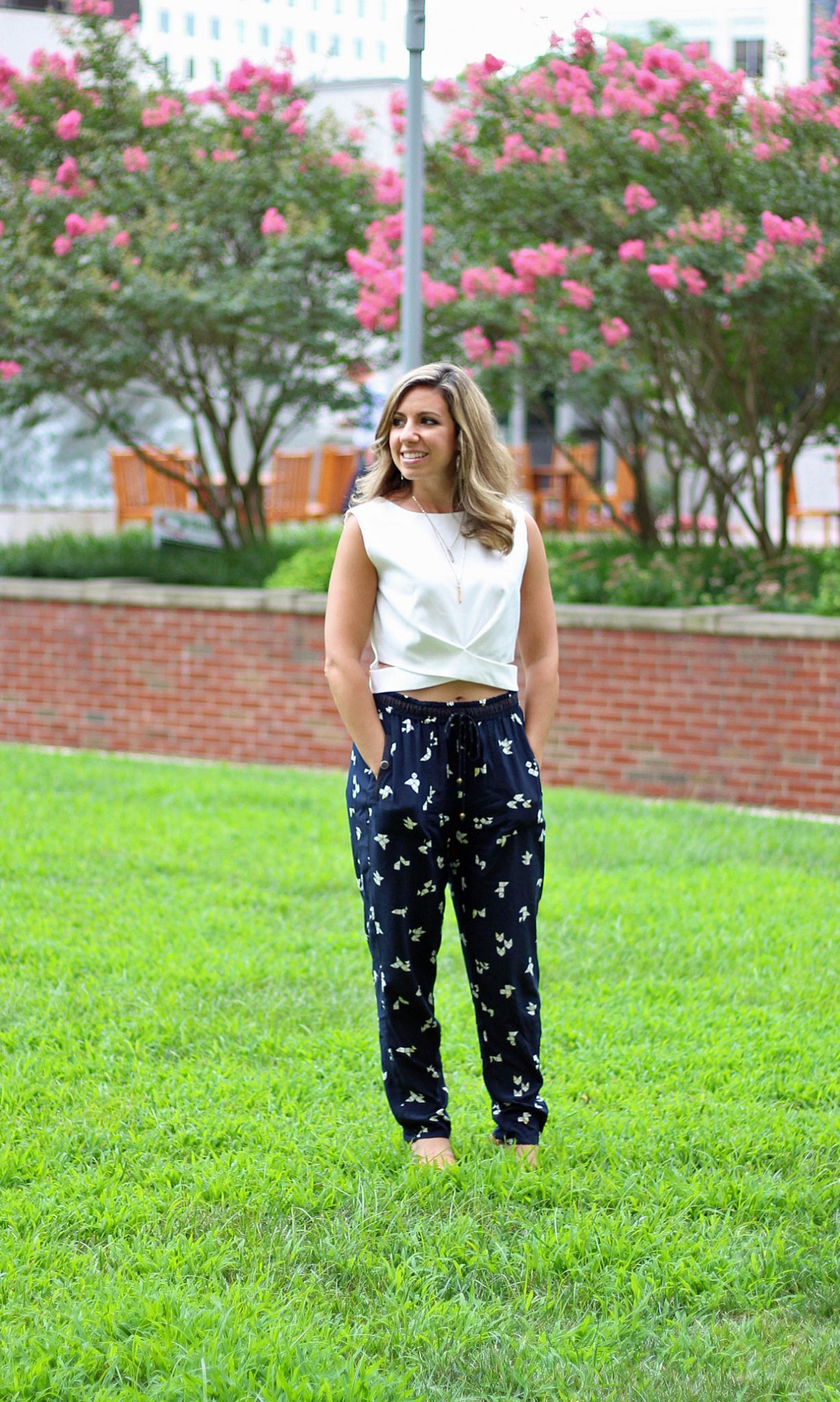 CHICWISH CROP TOP , ALSO LOVE THIS ONE | PRINTED PANTS (sold out from Anthropologie) SIMILAR FOR $20, SIMILAR FOR $10 | JCREW ESPADRILLES 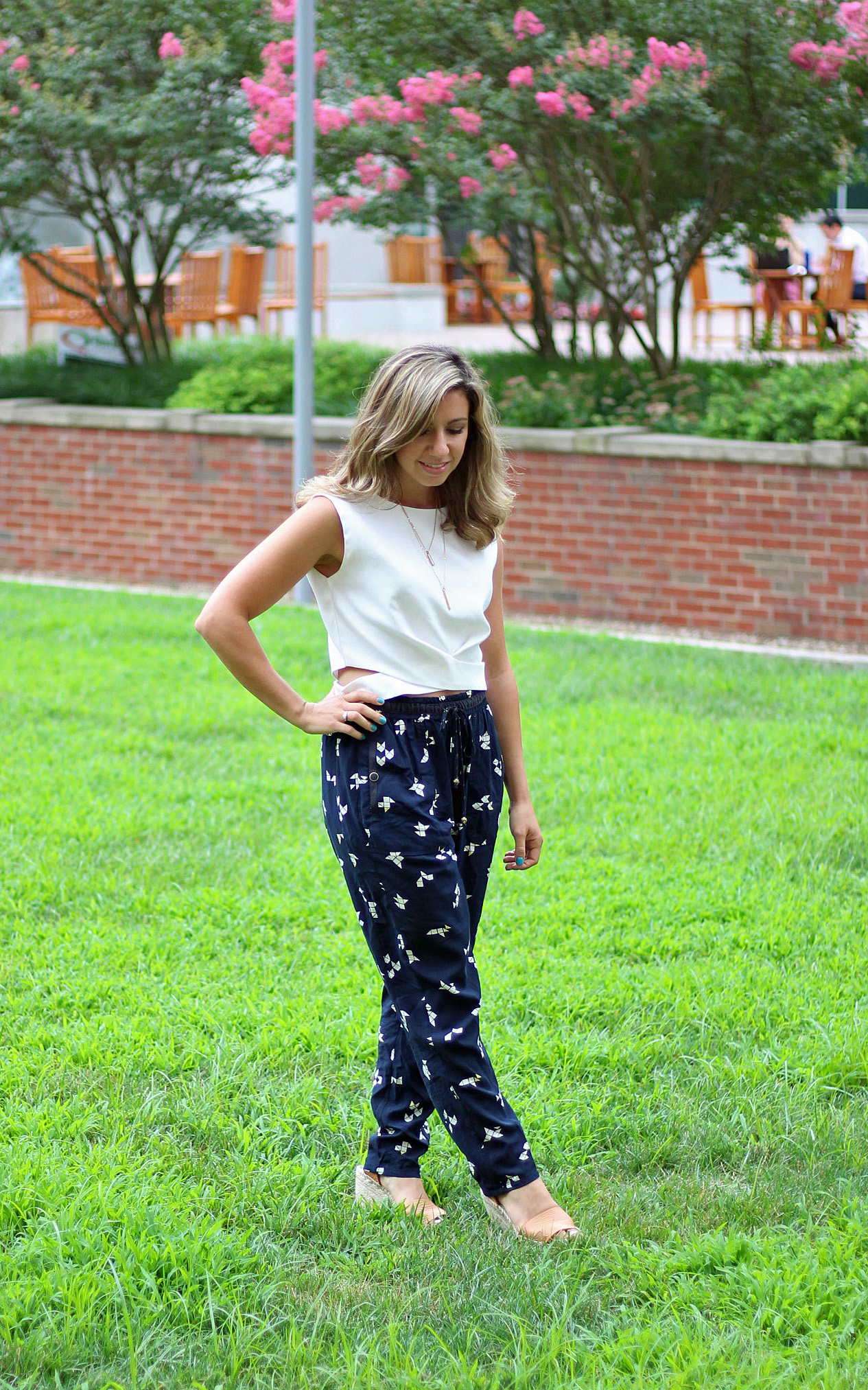 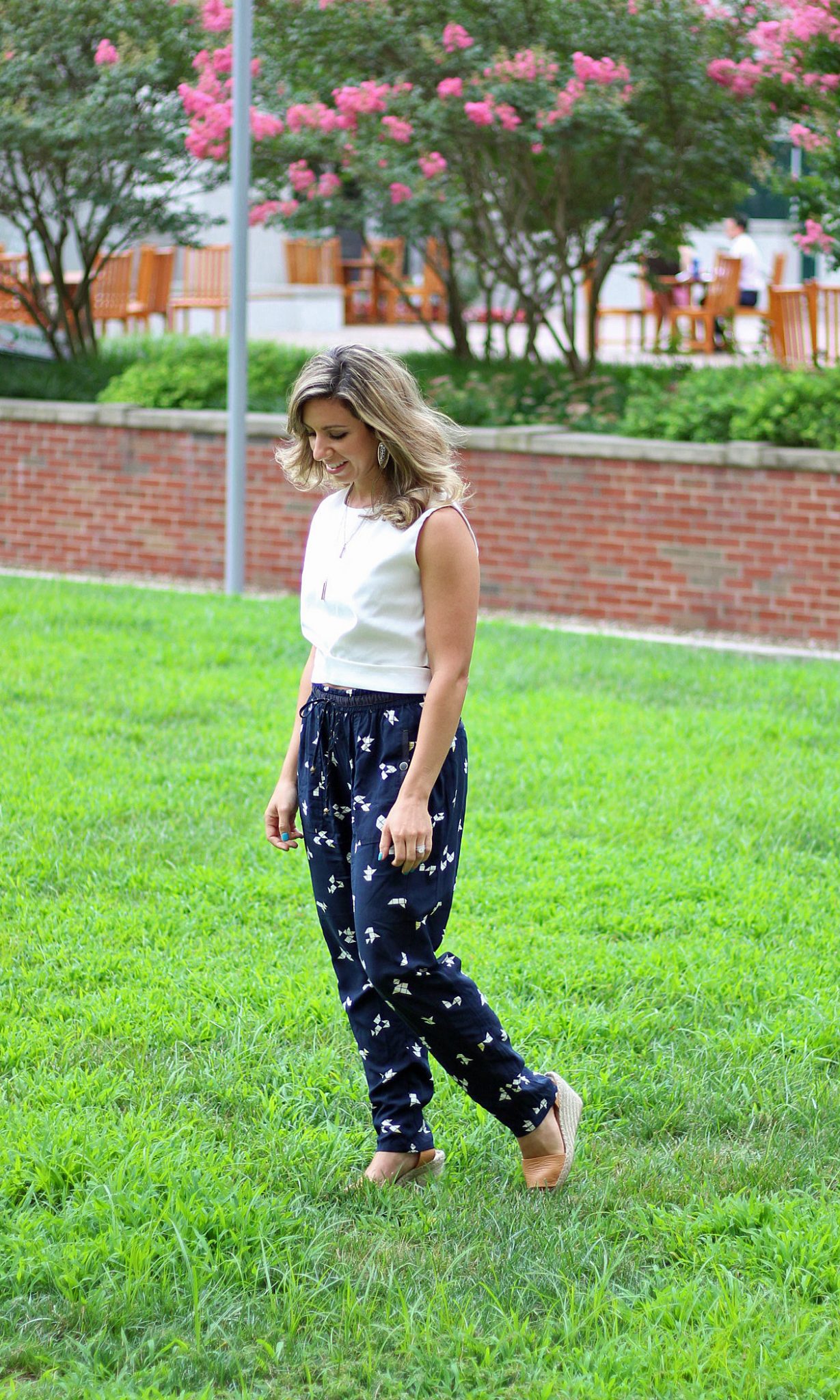 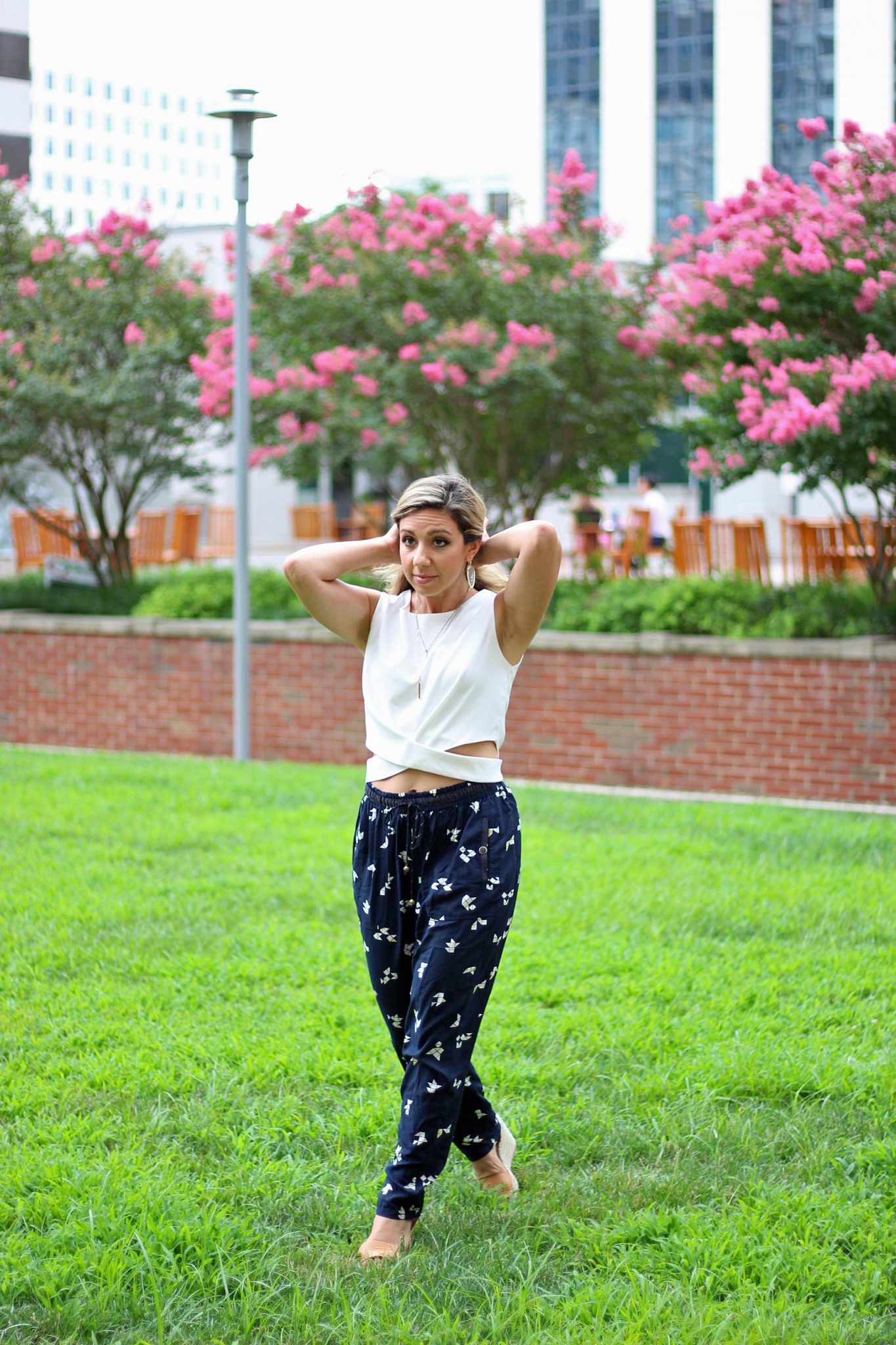 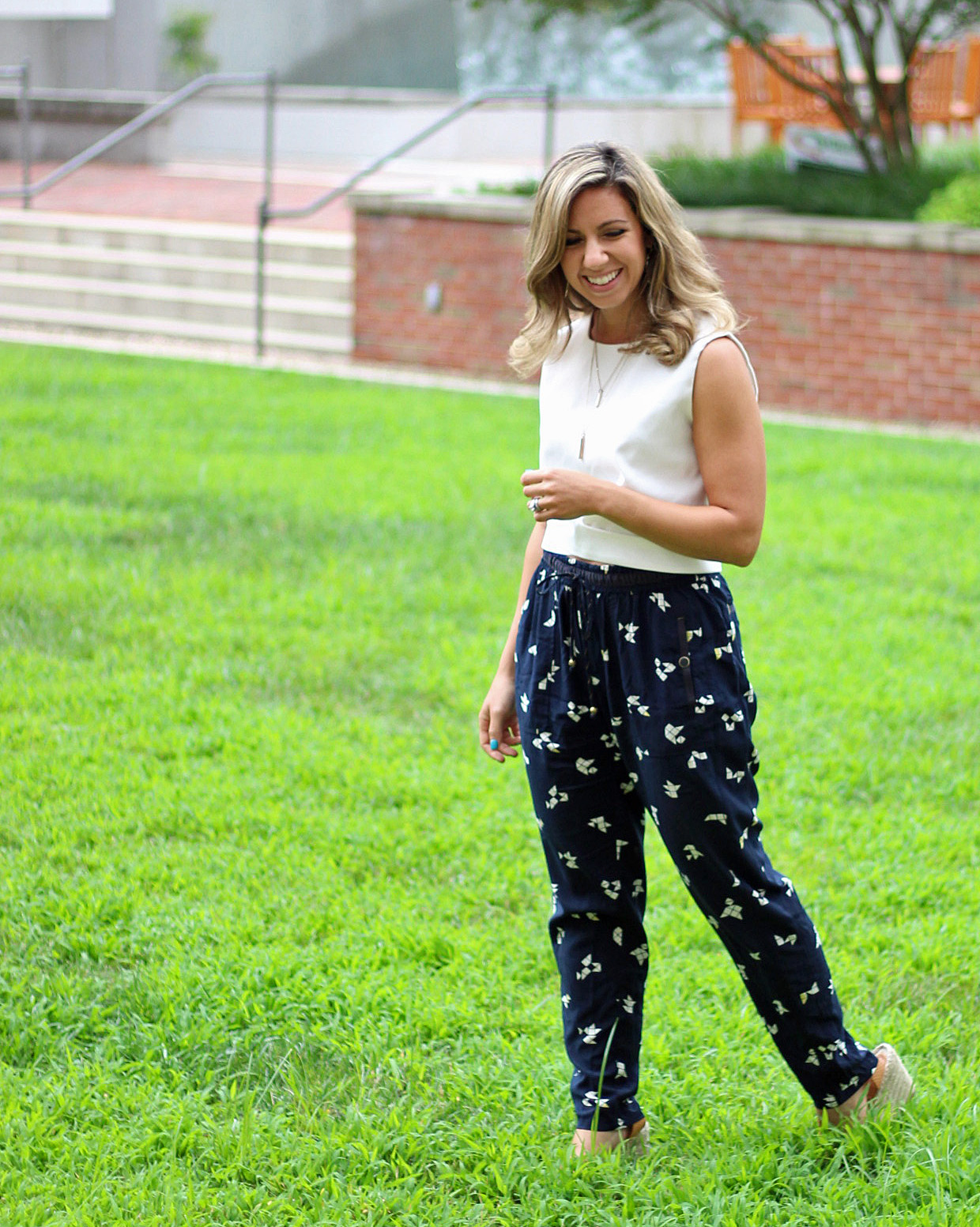 Thank you to Sarah and Caro for helping take these photos!

CHICWISH CROP TOP , ALSO LOVE THIS ONE | PRINTED PANTS (sold out from Anthropologie) SIMILAR FOR $20, SIMILAR FOR $10 | JCREW ESPADRILLES

So let’s talk about working out. My friends and family know I am a workout fiend. I like to try the new exercise fads and a daily sweat helps me de-stress, sleep, and remain a happy person. I’ve been that way since I was young. Whether it was trying to lose some poundage, or just to keep my head on straight while juggling all my projects.

When I was in middle school I joined the cross country team. I remember the coach asking us to run a mile on a trail behind the school as our warm up run. I would be completely wiped out after just the warm up. I wasn’t a big kid or anything, but it was my first endurance sport other than riding my bike around my neighborhood.

So I cried to my dad and we practiced running up and down my street (well, I ran, he biked) until I could run 1 mile without stopping. Then three, then five. I put my CD player on anti-skip mode (which never worked, right?) and completed the same route every time. I was addicted to the feeling of happy endorphins and knowing that if I pushed myself I could run that extra mile – and I felt powerful. I ran almost every day.

In high school I quit cross country to play field hockey. My coach was super pumped to have an endurance athlete on the team, because it meant I would run the entire game without getting subbed out. She seriously took advantage of that, but it made me a better team player and I had a blast. I went to practice every day and played a sport every season of the year.

In college I did the cardio bunny thing. My roomates and I ran, elliptical trained, treadmilled, you name it, almost every single day. I discovered the Jillian Michaels DVDs (which kick your butt, by the way). I don’t think it did sh*t for our bodies in terms of offsetting all the crap we ate and drank, but we were all ridiculously happy.

I continued running in law school, with A LOT of yoga mixed in, a little spinning, and some light weight lifting on my own. I mostly exercised to combat stress and to push bad thoughts out of my head. Law school can be really competitive and I tend to be extremely self critical. So all the hot yoga was a necessity. I think I went at least 4 days a week and if I skipped a day, I felt guilty and miserable.

After law school, I completed two half marathons with my friend Cait and kind of became burned out with running. I did a lot more high intensity interval training, sprints, and a little bit of crossfit. Again, 5 days a week, at the least.

Since moving to DC in October, I’ve been all over the place with my workouts. I really like crossfit because it feels great to lift heavy things and do intense bursts of work when I am stressed out. I love yoga to realign my spine after sitting on the computer for waaaay too long. Taking long walks around the city is great exercise, and I get to see so many interesting things and people. Now I run more for the sightseeing and to listen to my dorky podcasts and audiobooks than for a calorie burn or a de-stresser. Lately I’ve been taking workout breaks, but I’m happier in my own skin than I ever have been.

And recently, I shockingly allow myself to take days/weeks off from working out when I just don’t feel like it. The photos I’m sharing today are of me in my 3-week non-workout phase. I don’t beat myself up about not exercising 5 days a week anymore, and I don’t think I gained an ounce. I am a lot nicer to myself, and I think it shows on the outside.

So the message of this post is to be kind to yourself. If you are exhausted because you woke up at 6:00 a.m. to work on your passion project (cough cough) and worked late and didn’t get to eat dinner until 9:00p.m., you’re not alone. Sometimes you just do not feel like exercising, and that is okay. My arms might be a little softer, and my abs could be a little tighter, but who the heck cares. I am not measuring my self-worth by the cuts on my body, but rather in my ability to be a good friend, sister, wife, professional, and businesswoman. The push-ups and miles will be undoubtedly be waiting for me tomorrow, or the next day…or the day after that.

Taking a prenatal vitamin is important for women's

It’s your last chance to take advantage of @Gold